Skip to main content
You have permission to edit this article.
Edit
Home
News
Diversions
e-Edition
Columnists
Multimedia
Obituaries
Classifieds
Share This
1 of 2 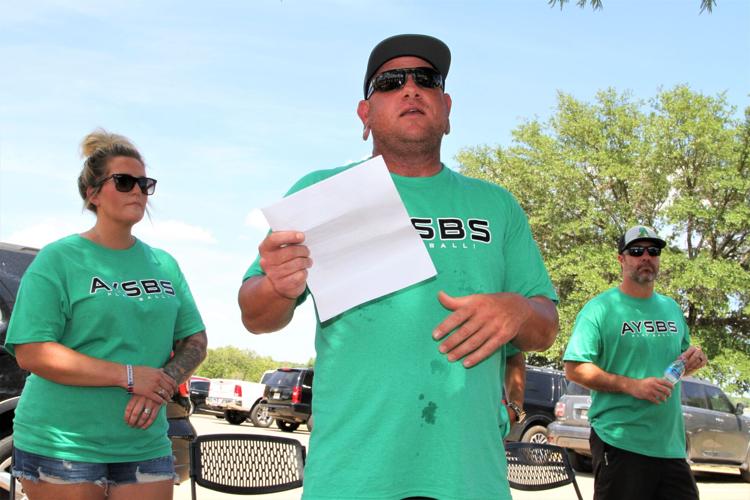 From left, Hope Winter, Justin Baisden and Chad Latta speak to parents at the inaugural meeting between parents and the Azle Youth Softball and Baseball Association board members. 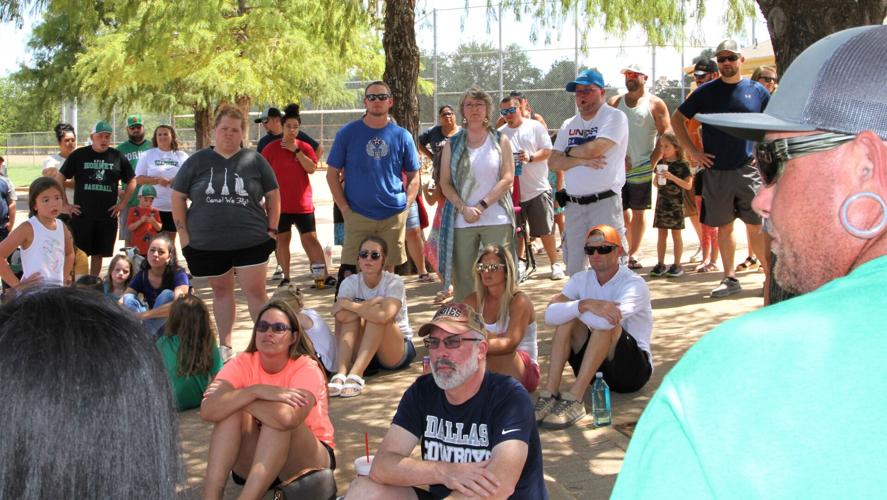 A large crowd of parents and kids turned out to ask questions about the news baseball and softball association.

From left, Hope Winter, Justin Baisden and Chad Latta speak to parents at the inaugural meeting between parents and the Azle Youth Softball and Baseball Association board members.

A large crowd of parents and kids turned out to ask questions about the news baseball and softball association.

A group of parents and young kids – about 50 people in all – met on Sunday, July 25, at Shady Grove Park to discuss the establishment of a new baseball and softball youth association.

The new group is called Azle Youth Sports Baseball and Softball, or AYSBS.

Afterward, the league founders considered the meeting a home run.

“The city is very much rallying around what we are doing and absolutely loving it,” said Justin Baisden, president of the group.

Until last year, Baisden was a board member at the longstanding Azle Baseball and Softball Association. He has spent 14 years coaching in youth leagues. Baisden, his wife, Tiffany Baisden, along with Hope Winter and Randy Swatsworth, had all served on the ABSA board before disembarking and establishing the AYSBS.

Justin Baisden said he left the ABSA after disagreements on how to keep the most talented older athletes from leaving to compete with private select clubs.

ABSA is “very much a rec mentality, which is fantastic,” Baisden said. “I'm there, too, with my rec thinking, but I also wanted to provide something for the more elite kids with a select and elite program along with the rec program, where we could accommodate everybody and keep everybody here in Azle.”

Baisden said he tried to sway a majority of ABSA board members to establish an elite program but “stepped away” after his effort stalled. Once he left the ABSA, he was inundated with requests from other parents to create a new league with a select program and a heavier emphasis on public transparency and parental involvement, he said.

“That's really what drew me to it, is the people calling me and saying, ‘We need to do something like what you were trying to do over there at ABSA,’” Baisden said. “People rallied and got me on board, and here we are.”

The Baisdens, along with Swatsworth, Winter, Jonathan Jones, Kyle Gathright and Chad Latta, are the inaugural board members at AYSBS.

There is no animosity between AYSBS and ABSA, Baisden said.

“I love a lot of people on that board,” he said. “They are very close friends of mine. They are very good people. We have our group that thinks our way, and we are trying to accommodate something for everybody so that we don't lose these select kids that are going out to wherever to go play. We want to keep them here. We can provide that.”

Rebekah Stepan, whose daughter has previously played in the ABSA, plans to register her in the new league this season.

Last season, her daughter “went to the World Series with our team, and we got no support from our ABSA organization at all,” she said. “If it wasn't for the coaches, we would not have been able to afford to go down there or afford to stay.”

She heard about the new league from her daughter’s All-Star coach.

“I figured I'd stop by and check it out,” she said. “It's exactly what we're looking for. They are going to listen to the parents. They listened to the coaches. They are ready to put the kids first.”

Her children had played in the ABSA for more than 10 years, she said.

The ABSA is a nonprofit that relies on volunteers. ABSA serves more than 600 players in rec ball, and many of them do leave for select leagues after they become older, said Amira Cook, softball commissioner.

“They want more competition, and we just don't have the volunteer power to do it,” Cook said. “Plus, I think it's a space and time issue. Our games and schedules were booked to the max last year with just the rec games that we had.”

She doesn’t recall any parents ever asking board members to establish an elite program. She understands that some parents have shown interest in the new league, and she said there is room in a fast-growing Azle for both groups.

“It's something different,” she said. “People are attracted to new things. That's OK if they want to go see what it's about.”

ABSA, though, believes in its mission of providing a solid league for kids wanting to learn the game.

“You have to be able to provide a program that's a ground floor for people,” she said. “I've got kids that sign up for the first time that are 12 and 14 years old, never picked up a ball in their life. They can't jump into a competitive league. That's a danger to them.”

Derrick Nelson, an Azle city councilman, attended the meeting and said he would be registering his two daughters in the new league. He likes AYSBS’s vision for the city, he said.

“I'm going to try and work with them, hopefully with the city of Azle, to maximize the opportunities for the kids to play,” he said. “We have resources. We just need to maximize them, and then, we could look into growing those resources - meaning the fields and everything. I'm excited about this new league.”

His daughters had played in the ABSA previously.

“Our coaches already said they were going to move to the new league,” Nelson said. “A lot of people, we're all just going to switch to this new league because we trust the board. We all know these guys personally.”

Nelson didn’t have any complaints about the ABSA but said he has heard negative feedback from others.

“I think that's ultimately what led to this new league,” he said.

The AYSBS will seek to establish new teams and entice independent select teams to join their league. The AYSBS hopes to compete against teams in nearby cities such as White Settlement, Springtown, Saginaw, Lake Worth, Benbrook, Aledo and others.

Currently, many athletes switch to more competitive leagues to try to gain interest from college recruiters.

“They take off, and they go select,” Baisden said. “They are leaving the town of Azle and playing the select leagues that are all over the place. We're trying to create a culture where they want to stay here and be involved with this all the way through. To have a place for the select players to play and have a place for the rec players to play and be able to keep everything involved here at Azle.”